Kinescribe is a translation of LabanWriter, a movement notation editor I designed and developed for the Mac, to the iPad. The new platform required careful consideration of how user interaction would work without the aid of a cursor, while at the same time offering an opportunity to improve functionality over the desktop version.

Development required a series of iterations, done in conjunction with a movement notation expert, Professor Hannah Kosstrin. Together, functionality was discussed, options were explored, the UI was fine-tuned until it was powerful, flexible and intuitive.

Since there was already an installed user base of desktop users, the new interface could not seem too foreign. Testing with users was done to confirm that the new touch metaphors were understandable. Users also provided useful feedback about what features they wanted added.

Overall, the use of popovers to allow editing of specific symbols was one of the major UI additions. On the desktop, this functionality was accomplished using a floating palette, but on iOS, popover windows were used so the editing options would be specific to a particular symbol. Using contextual information makes the interface more powerful, and easier for users to navigate.

Development happened over two years, working part-time and funded by a grant from the National Endowment for the Arts. Kinescribe is now available on the Apple App Store. 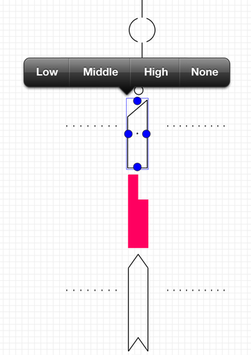 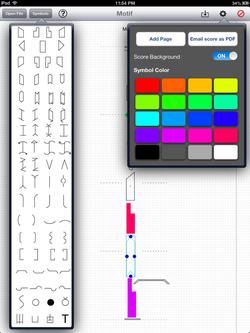 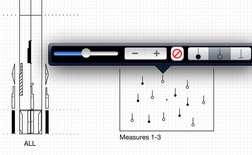