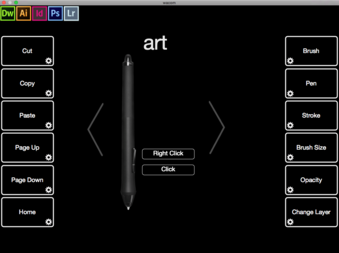 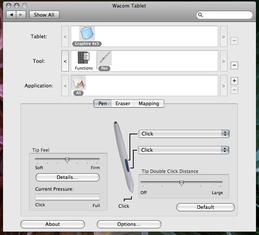 As a programmer at Wacom, a technology company, part of my charge was to maintain and update the control panel that permits users to change settings for their Wacom tablets and pens.

As I worked on the control panel, I realized that it had a number of interface shortcomings. For one, the structure of the settings was hard for novices to understand. There are three rows at the top that correspond to the tablet, tool and application, which allow users to have dozens of different settings for a specific combination of those three items.

However, most users want a smaller set of options. Further, they would like to be able to copy settings from one application to another, but this tree structure makes it hard to do that. The solution was to create a settings "space", which associated settings with a particular set of pens and applications.

The current control panel used controls that were not touch friendly, and as Wacom produced more direct touch devices, the need for a touchable interface became clear. The new interface stresses larger targets, animated navigation and the ability to change settings in the same screen as the actual controls, a major improvement over the existing system.

I developed this prototype application on the Mac to show management how the user interface of their tools could be improved.